Photographer Michael Dweck has long been a patron of Montauk’s sandy surf. Since moving here in the early 2000s Dweck’s photographic oeuvre managed to encapsulate the history of Montauk and transfix it in the context of today, culminating in the wildly popular book, “The End: Montauk, N.Y.”

In anticipation of his gallery show in our lobby this June, we walked the walk and taulk-ed the taulk with Dweck, covering everything from his favorite Montauk haunts to the relationship between time and space.

I don’t necessarily know the arc of a perfect day, but I know the components: there would have to be friends and family, some creative escapes (both me creating and enjoying others’ work), food by the coast, maybe some drinks, maybe some live music? I don’t know. It’s hard to expand upon now without it feeling like a cliché beer commercial. Now it’s tempting to say, “blacking out the windows, drinking bourbon and listening to Bach.” I guess one of the things I value in a great day is spontaneity, so it makes it hard to forecast. Is that a cop-out answer?

Not at all! How long have you lived in Montauk? (this one should be easier to respond to)

I started coming out really regularly in the 70’s, and started photographing in earnest in the early 2000’s. But I was out there from as early as I can remember. My parents moved to Bellmore when I was three, and we’d head out to fish, or to go to the beach. I always say “Montauk was home before it was home,” if that makes sense. It’s one of those environments – or was one of those environments, at least – that’s singular and, you know, your brain is built to recognize patterns and make connections, so when it finds something without any concrete antecedent – something like Montauk – I think that’s when it’s stumped… Those are my early memories: the town being this mystifying host. It was challenging and comforting. 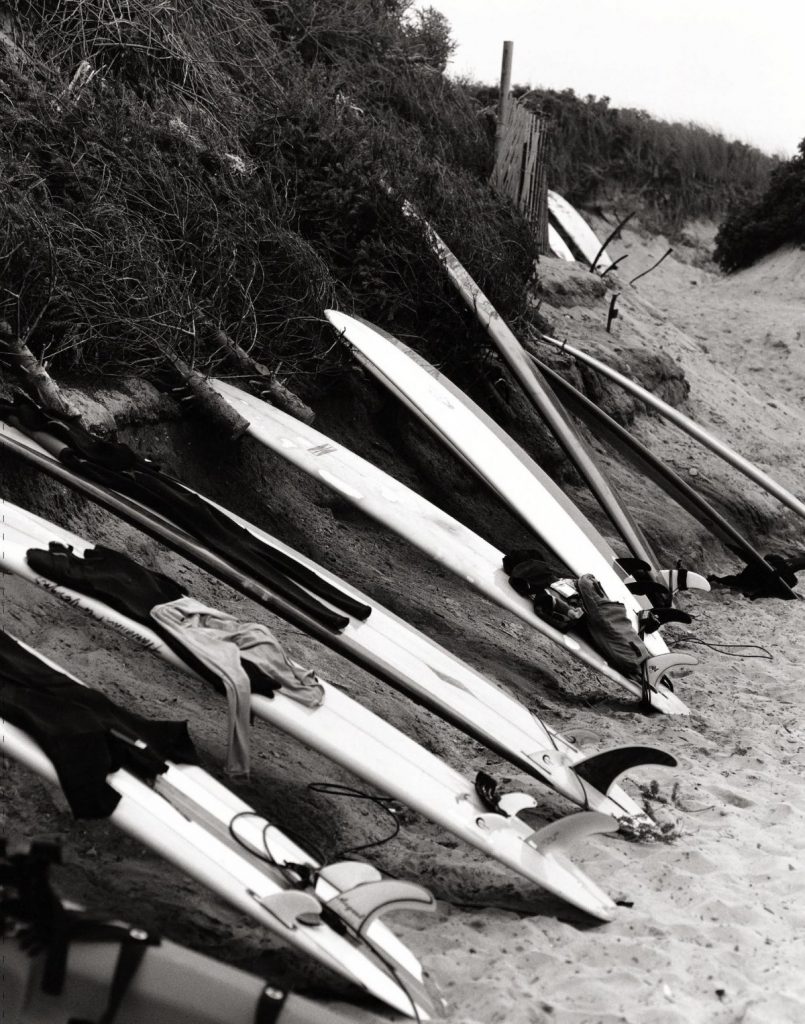 We love your Montauk photo series…what makes beach culture so fascinating to you?

I fell in love with the beach as a kid – I learned to take photos in the sand at 11 or 12, experimenting with natural light and even before that, I was always mesmerized by the beach. It wasn’t even the culture, per se, but the spectacle of it all: 99% of the world is buttoned-up and predictable and dry, but here you have this stretch of churning coast, the light dancing, the salty whip of air, everyone’s half-naked, people are gliding on top of the water and floating along. I know it sounds naïve, but to a child, that seems enchanting.

As I got older, I recognized that these places were also a draw for like minded people – creative and freewheeling types. I don’t idealize surf culture or get too deep into any spiritual associations, but I do feel very comfortable by water and, of course, the culture of Montauk has been a lifelong draw, which kept me by the surf.

What do you think makes the east end’s version of it unique?

To me, it always felt like a really small, pastoral town that accidentally ended up in paradise. Like it was supposed to be in Idaho or something, and the paperwork mistakenly plopped it down in this impossibly beautiful setting.

I guess we’re all so accustomed to beautiful places feeling like resorts, where everything is landscaped and tailored and fluffed up with faux-hospitality in an effort to separate you from your money. Montauk never felt like that (and, I think, that’s what drew me to Cuba too). These were sincere places where you could make an honest living with your hands, and celebrate your community without having to sell some cartoon culture on shot glasses and coasters.

Beach scenes are often depicted as vividly colorful…what made you decide on black and white?

That’s a great question – and I think you’re right on top of the answer. In one sense, I avoid that saturation and those hues because they’re expected. And I don’t say that as a contrarian. I say that as someone that doesn’t like to cheat.

It’s almost too easy to build false associations with the familiar, especially with something as familiar as the ocean, the beach. Those are the false associations of stock photos in picture frames, and the backdrop of those beer commercials I mentioned. It’s too easy to transport people with projections of paradise, and much harder to transport them sincerely. That’s what I try to do – especially as a narrative artist. I want people to understand the space and time of my images – I want them to be transported by character and motion and mood, not just by setting or some terrific sunset. It also allows me to separate the reality from the art in a way.

It was the same when I photographed in Cuba – there were some beautiful colors in the sea and the sky, and plenty of buildings in those golds and turquoises that you always see – but those are postcard shots. Those are clichés meant to “wow”, and there’s a difference between “wowing” an audience and “moving” one.

That’s not to say that I never use color, or that anyone who uses color is cheating. Just for me – especially in Montauk – I felt like the story was more honest and easier to inhabit in B&W.

Can you share some of your favorite Montauk spots to eat/drink/surf/explore/shoot?

There are so many – many of which are gone. I’ll always love working at Ditch Plains, and going to the Ditch Witch for a morning cup of Costa Rican Joe, and Harvest for a late dinner, but if I may, I’d like to use this space to eulogize a few that went belly-up in the last few years: East Deck, Salivar’s, Johnny’s Tackle – those were my places.

Places like that were the epitome of Montauk for me: independently-owned, locally-focused, unassuming. There are so few places that have their own identity. Most get by on projecting what they want to be, or reflecting the identity of who they want to court. I miss the places with absolute character. that’s what Montauk was.

Good answer. The old gems are definitely missed, but their memories remain (amongst locals at least). On that note, you’ve said “memory makes place timeless.” Can you elaborate on that?

Sure. In the context of my work, memory is almost a currency. It’s what allows you entry into the endangered societies that my narratives grow out of. Without memory there’s no continuity of character – not for a person nor a place, but with some ties between moments – whether they’re honest in life or elaborated upon in art – you can connect with versions of self and setting that have lapsed. That’s a really simple way of explaining what I do in directing fictionalized stories atop the very real histories of societies. I’m honoring the power of memory in a way or honoring an openness to memory, at least. Saying, “X changed,” or “I’m not Y” anymore, “We’ll never get back to Z” but at the same time, reminding the audience that memory is time travel.

Art can trick the senses in that way. 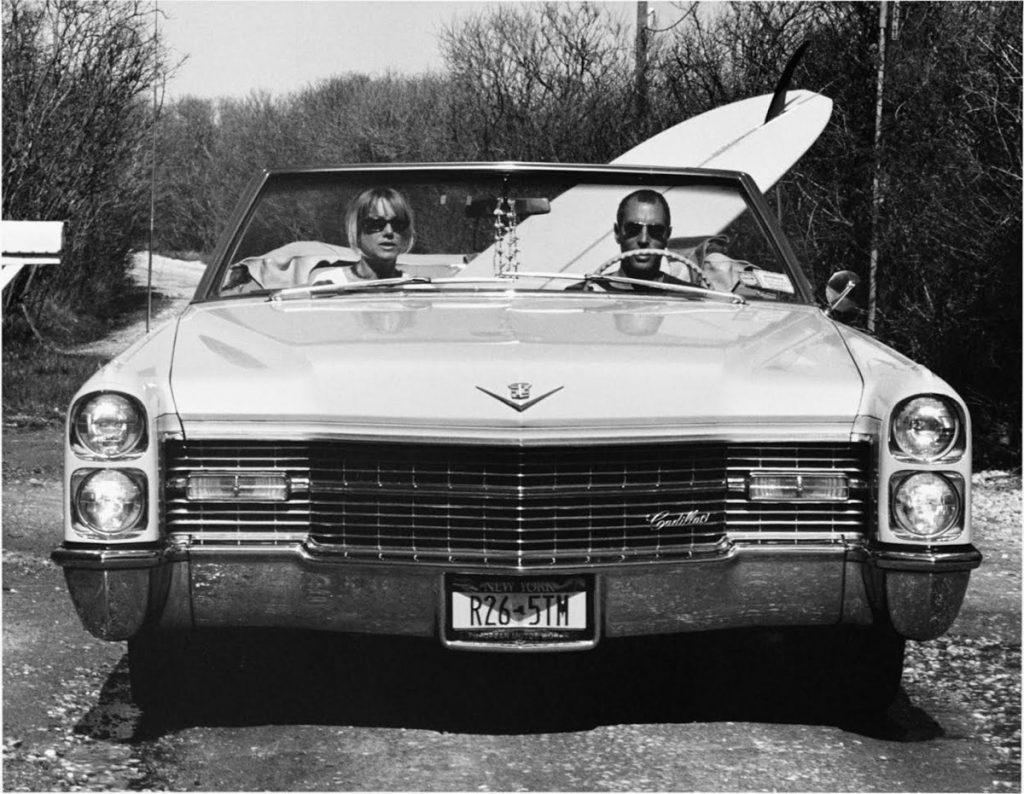 What would you say has changed the most in Montauk in the past decade? How do you (honestly) feel about the shift? (We won’t tell, promise!)

It would be easy to bemoan the traffic or the real estate changes or the costs or, you know, the demographics, but it’s always the intangibles for me.

I may be going back more than a decade, but there used to be a counterintuitive mix of the magical and the ordinary out here. Montauk was a place that made me feel like a god and a housefly. I could marvel at the waves and the scope of the sea, these ineffable phenomena and in the next moment, I could have a drink with some taciturn fisherman and come back to the simplest human emotions and realities. Does that make sense? In a way, it was so foreign and so common. So profound and so simple. Welcoming and unwelcoming at the same time.

That’s a mix that’s escaping as the charm gets priced out and the crowds get larger. It’s hard in any economy to defy “brand,” and to be complex and contradictory. There’s money in exact, on-message branding that can fit in 140-characters, and Montauk was never that. Like I said before, it was a simple, run-of-the-mill small town that somehow ended up in paradise.

And how do I feel about it, now that it’s growing into its “paradise?” I don’t know. I hate to be pessimistic or fatalistic. Any –istic, really. In a way Montauk will always be Montauk. And even when it’s not anymore, I still have memory, right? In that sense, it will always be timeless.

Thank you Michael for your candid and refreshing responses!

We’ll leave you guys with this: Although times have undoubtedly changed, we’ll keep seeking out those special moments that harken back to a simpler time (both here and in general) and that “counterintuitive mix of the magical and the ordinary” and hope you’ll come to our little town embracing them as well.

Please join us on Friday, June 22nd for a special evening to celebrate the opening of Michael’s MBH showcase of iconic images. He’ll be in attendance to sign copies of his book which will also be available for purchase.

As always, peep our events calendar for deets.