Behind the Bottle with Eileen M. Duffy

I Wikipedia everything. It’s a helpful point of reference for any subject at hand and makes me an instant expert on just about anything. So naturally, when I first gained a curiosity about the wines of Long Island, step one was to see what Wiki had to say. Turns out though, it’s not much. Afforded little more than a paragraph along with a mere two links to sub-subjects given an even smaller nod, there wasn’t a whole lot to be gleaned. As someone who’s taken more than my fair share of Jitney rides out east, I knew that couldn’t be it. We always pass beautiful rolling fields packed with grape vines. Every wine bar in Manhattan even seems to have an offering from its nautical neighbor! Exit out of the Wiki page and fast forward eight years, several fancy certifications and a whole lot of research, I’ve learned quite a bit about this burgeoning American wine region.

Only 40 years young, some producers on Long Island are already competing with wineries elsewhere in the globe that have been producing wine for centuries. Beyond that, it has an extremely unique terroir — terroir is a concept that celebrates different expressions in a wine that are derived from differences in the land where the grapes are grown. The land here has soils formed in a glacial outwash from the retreat of the Wisconsin-age glaciers of 10,000 years ago. That is important because the ability of this unique soil to naturally drain excess water while also moderating a water-holding capacity allows the vineyards to simultaneously control and limit the impact of summer rains and droughts all while maintaining quality. That is really good when a severe drought can be immediately followed by torrential rains like what California is experiencing right now.

The climate on Long Island can be pretty gnarly. It is the most extreme kind of maritime with the Atlantic Ocean to the south and the Long Island Sound at a maximum north to south distance of 23 miles — in many cases, it’s less. This means there can be months of drought or rain so relentless it rots an entire vineyard. As if that isn’t enough to contend with, there are always the hurricanes!

Luckily for those curious to learn more, Eileen M. Duffy, the editor of Edible East End and Edible Long Island magazines, turned her interest for Long Island wine into a true love affair. With her new book, “Behind the Bottle: The Rise of Wine on Long Island,” she guides us through everything we need to know about Long Island. Profiling owners, winemakers, and personalities from around the country and the world, Behind the Bottle is a fun and intriguing look at the people who have made Long Island into one of the hottest wine regions in the country.

Below is an excerpt from a recent conversation we had about her favorite wine region and the book she wrote about it:

Ok. So they make wine on Long Island. Where exactly does it come from? We all know it’s a big area and typically the first thoughts are of beaches and share houses. Is there a particular region that’s best for growing grapes?

The majority of the vineyards are on the East End of Long Island with a concentration on the North Fork, both historically agricultural land. When the first wine grapes were planted in 1973, most of the North Fork was still being farmed. The soil is rich and the weather is moderated by the surrounding waters.

What got you so interested in Long Island wine?

I was always into food and wine. The Long Island wine thing started in the late ’90s which was when I moved out to the East End. And started in earnest when I began writing for a community weekly on the North Fork in 2003.

It must be an interesting place to make wine. What are three things most people don’t know about wines from out on the eastern shores of Long Island?

Even though Long Island Wine Country is over 40 years old, people are still discovering that we make wine out here. So that’s a big one. The other two are that it’s available in all price ranges and styles. And it goes without saying, it’s also really good.

What was the process of writing the book like? Were you able to taste a lot of local wine offerings? How did you balance working on two magazines and a book simultaneously?

Luckily, my magazine job keeps me tasting local wine all the time. It’s my beat, what can I say? To write the book, I set up interviews with the winemakers, we spent about two hours together each, and then I was able to write from my notes and from my 10 years of experience. I’m not sure how I balanced it really. I just kept plugging away.

What was your professional journey like leading up to writing for Edible East End and Edible Long Island magazines, and when did your passion for food and beverage begin? 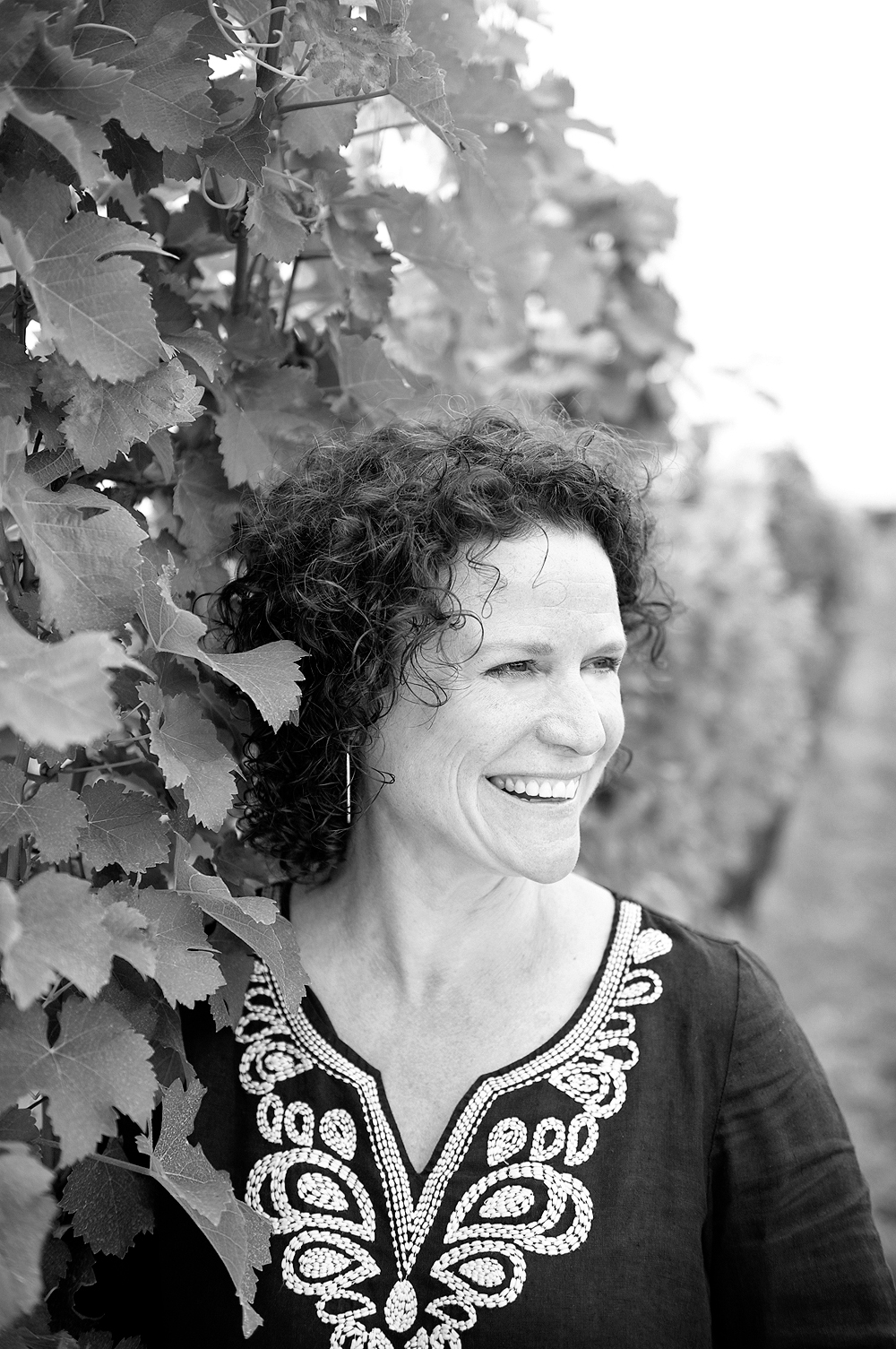 The food thing definitely started in my mother’s kitchen. She loved to eat and try new recipes and she let me cook whatever I wanted. It was kind of an after-school activity. Lots of baking. And then one of my first jobs was in a restaurant. I worked in fine dining restaurants as a server or a manager right through college and graduate school (where I studied English). And then in 2002 my ex and I bought Six Corners — a wine shop in Westhampton Beach.

What are some of the best wines Long Island produces? I want to make sure I’m ordering right at my dinner spot tonight!

I don’t have favorites and would never identify one wine as the best, because it’s easy to find a Long Island wine for any occasion. Looking for something fresh and beachy? We’ve got affordable sauvignon blanc and rosé (the 2014 First Label Sauvignon Blanc from Raphael recently got 92 points from the Wine Advocate and the 2014 Bouquet Rosé got 90 points). Want to try some quality merlot to go with some Long Island Duck? Check out what the members of the Long Island Merlot Alliance are producing, and merlot from the rest of the region. You can get a drink-now wine like the 2013 or 2014 Bridge Lane Red (available in a box that holds four bottles for $40) or step it up a bit with the 2010 Nine Barrels Reserve Merlot from Shinn Estate Vineyard. That wine will also benefit from years in the cellar.

What is your favorite Montauk restaurant dish and which wine would you pair it with?

If I’m in Montauk, I head directly for Duryea’s Lobster Deck. I love the relaxed atmosphere and you can bring your own wine. I love high acid chardonnay with a bit of oak, or no oak, with lobster. Good choices are the deliciously fresh 2014 Mattebella Chardonnay made by Eric Fry of Lenz or any of the elegant oaked chardonnays from Sherwood House. Winemaker Gilles Martin’s French roots really shine through.

What are some of the key things to keep in mind for pairing food and wine?

First of all, there are not right and wrong answers. Drink what you like, put ice in it, whatever. Winemakers don’t care, they are just happy you’re drinking wine. But there are some pairings that really sing. Although some will argue with me, as I said above, I love a non-California style chardonnay with lobster. The acid really cuts through the amount of butter I like to put on it. If you feel like eating something heavy in cooler weather get some heavier wine with more tannins and more oak. If you feel like having something lighter in warmer weather… see the answer to the next question.

Why do you think rosé is so prevalent in the summer time? Is that a fairly long standing tradition?

It’s about the balance. Let’s pretend wine is chocolate. What kind of chocolate do you want to eat in the summer? Molten chocolate cake? A steaming cup of cocoa? Nope, you’re going for some chocolate sorbet or one of those delicious chocolate pudding pops while you’re sitting in the sun. Did I just compare rosé to pudding pops? I think I did.

I’m headed out East this weekend for a BBQ — which wine should I bring if I want to drink local?

I’m going to go off the reservation and tell you to get some beer. Montauk Brewing Company is two blocks away from the Montauk Beach House. Now that’s local.

Currently the Metro New York District Manager for Maisons Marques & Domaines/Champagne Louis Roederer, Vanessa’s passion for wine began in her hometown of Louisville, KY. After earning her bachelor’s degree in philosophy from the University of Louisville, Price traded in Plato for Pinot as she moved to New York to open Balon, a wine bar/bistro focusing on esoteric appellations of the world. Her next stop was The American Sommelier Association, where she helped update course textbooks and class structure and eventually went on to become an instructor. A few years ago, Price moved to the distributor level, taking a position in sales at Empire Merchants. Price has also taken on various freelance and consulting projects from casual, high-volume bistro beverage programs to well-known New York institutions with multi-million dollar cellars.

Price earned the Wine & Spirit Education Trust®Advanced Certificate in 2010 and the WSET®Diploma in 2014 through International Wine Center.