While Kenya and Montauk don’t seem to have immediate obvious synergy, ethical fashion brand Duka is attempting to bridge that gap this weekend with their pop up shop in collaboration with local favorite Martine and Juan and FairEnds. As is the case with many of Montauk’s most fascinating tales, Bruce Weber also played a part. We’re happy and proud to host them this weekend, but first let’s start at the beginning. 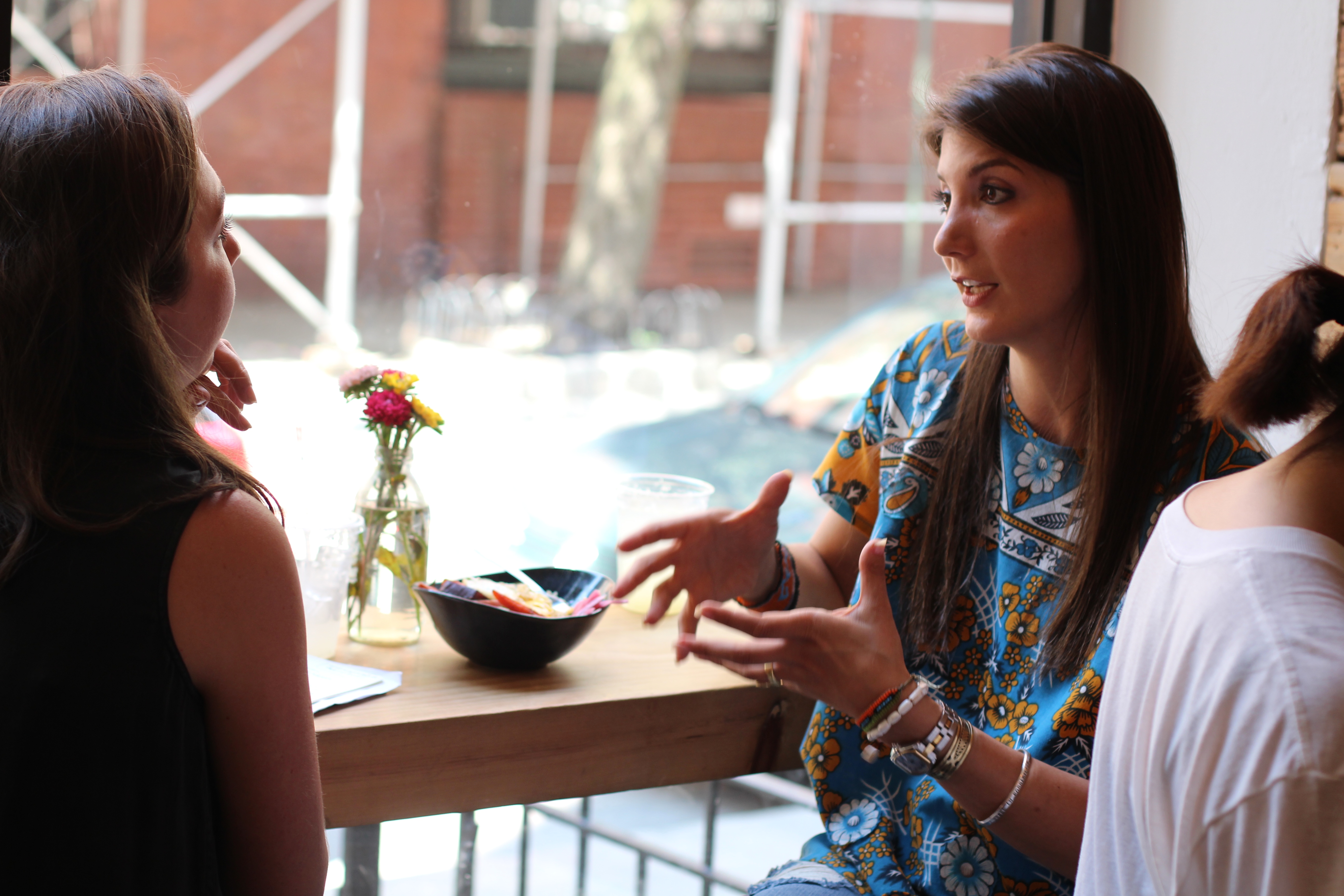 Most slow fashion businesses have complicated journeys both behind and ahead of them and this one is no different. I sat down with one half of the brand, the stateside half, at The Elk cafe in the West Village four days ago and it’s taken me until now to fully process it and try to figure out how to share this story. Jules and I agreed it best to try to keep it as light and positive as possible. The Jules I’m referring to is Jules Spehar who with her childhood friend Kate Crowley founded the brand and the manufacturing company that’s grown out of it. Kate received a master’s degree in International Relations and Affairs from The New School and went on to hold a position as Country Director of the East African Center for the Empowerment of Women and Children. While Jules graduated from Parsons with a degree in Fashion Marketing & Merchandising, she studied Sociology prior to that and was involved with nonprofits while working in the fashion industry. After visiting Kate in Kenya, Jules fell in love with the place and the people and couldn’t shake the feeling for years to come until they both finally decided that it was time to make Duka happen. 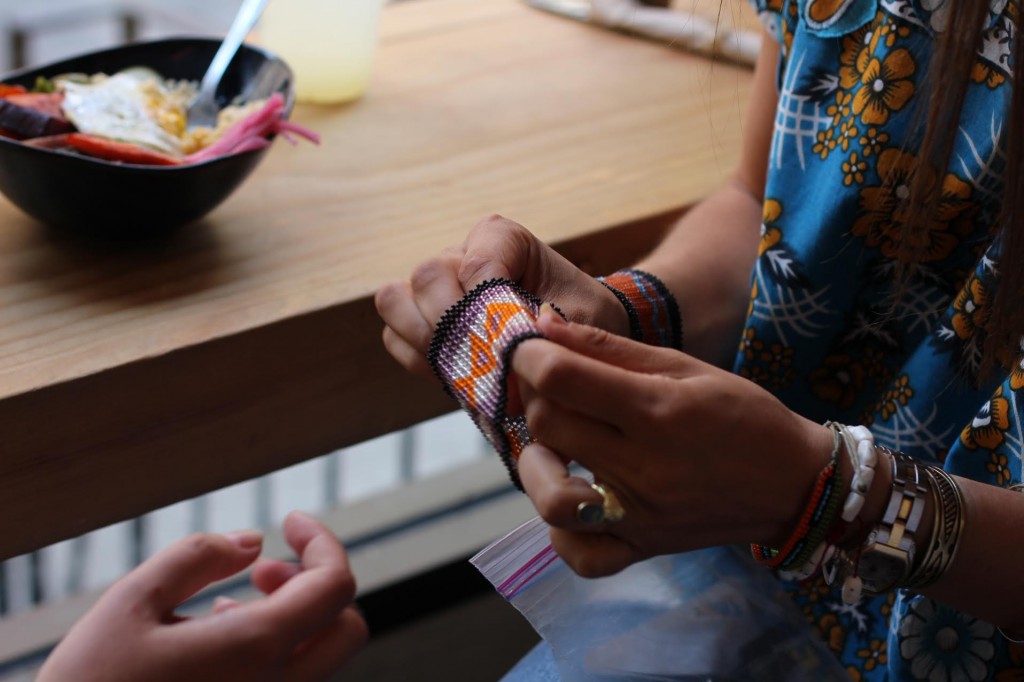 Every single piece in the line (with the exception of bracelet and objet d’art collaborations) starts with a Kanga, which is a traditional cotton cloth originating in East Africa. The Kangas Duka uses have carried babies, held baskets and shaded women from the African sun. Each Kanga is hand-patched with remnants of other Kangas allowing their lifecycle to continue. They’re sourced directly from women in the local village communities, earning money for both buyers and sellers and thus helping contribute to their financial independence.

Each print is only made once to commemorate a special occasion (weddings, funerals, Obama being elected – no, seriously). In the more remote villages the Kanga is used until it is worn thin, whereas in wealthier areas they turn over more quickly. Either way, Duka has to restore them and often patch together pieces from the ones in the best condition. When I asked if the women have trouble parting with them, or if they hold any sacred value or significance that would be inappropriate to pass on or purchase, I learned that actually, they wouldn’t think of wearing an old piece and are more than happy to sell them, even slightly questioning why Westerners would have interest in their retired wares. I suppose it makes sense that an underprivileged village community values the new and commodified the same way we value vintage, antique and rare. 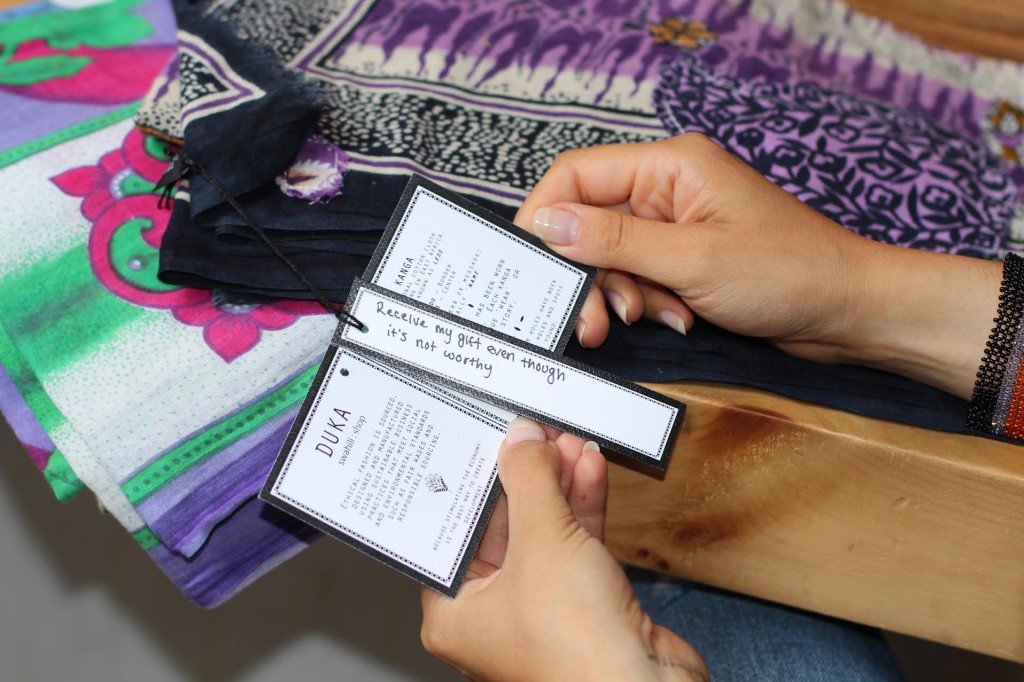 Each Kanga comes with its very own Jina or proverb (the literal translation from Swahili is “name”), ranging from corny clichés to lamenting on weather and farming conditions and everything in between. In fact, this is just about the only platform the typically polite and agreeable Kenyan women employ for snarky gossip. This is perhaps the most anthropologically valuable and also most arduous layer of the Duka business model. Each and every Kanga is photographed and archived along with the Swahili and English translated version of its respective proverb, which are then both also handwritten on the hangtag on every piece being sold. They vary by region, season and other more subtle sociological factors and could potentially stand to become an unmatched insight into the morale of the villages over time as they function as a sort of thermometer for current conditions. In the meantime, however, this process is putting the “slow” into their particular brand of slow fashion.

To that end, I questioned whether this piece should perhaps go into our “Make Waves” section dedicated to charity and philanthropy versus the “Threads” section where you’re presumably reading it now. Jules assured me though that at the end of the day, they are a fashion brand first and foremost. As someone who’s struggled with internal conflicts over working in fashion with a capital “F” over the years, I was admittedly delighted to hear this. It’s yet another sign that it means different things to different people and that large sections of the industry are in fact changing for the better. The irony isn’t lost on me, however, that the slow fashion movement isn’t fast to take off widely. Unsurprisingly, there’s a Swahili proverb that fits: “POLE, POLE” meaning “slowly, slowly.”

To add to the staggering challenges Duka faces, they not only source all of their materials in East Africa, but they have actually created a factory in Kenya and are teaching local women to sew all of the scarves, pocket squares, tops and dresses the line produces. The zero waste facility is now even taking on small orders from other merchants. The pieces are designed by Jules and will continue to be more and more involved as the women develop their skills, the idea being that they will then be able to teach each other, their daughters, and so on. Through this process they’ve come to discover that Pesaka Charo, one of the tailors whose family only allowed the boys to attend secondary school, has a particular flare for design that would otherwise never have been tapped into. While Celina Karima, who only finished class 6 because that was all her family could afford, is now Duka’s photographer and archivist. These are only two examples, but Jules and Kate know all of the people they employ personally and in many cases they’ve been in their homes and know their families as well. Hearing about all of this allayed any ounce of true to form New Yorker skepticism I may have initially had about the intentions and transparency of this kind of effort being championed by two white American women. However, it’s not only impossible to relay all of this information on a label or tag, but, also, for better or worse, people most likely don’t want to think about overwhelming geo-political issues when they’re out shopping.

Sadly, there is currently a lot of bad news out of Kenya. The political turmoil has stalled tourism and consequently put a lot of men out of work. Because they don’t want to risk resentment from the male population, Jules mentions that they’ve always made it a priority to also employ the local men (building needs, etc.) while a lot of outside organizations (especially those to do with fashion, jewelry and artisan crafts) focus primarily on women and children. Keeping the family unit in mind is essential in a place where everyone gets married and has kids. Despite tumultuous times though, Duka is committed to remaining in Kenya and has no plans to relocate until/unless they end up needing to employ a larger facility down the line if/when they end up scaling their offerings. For now though, each piece in the line is not merely “one a kind” as many brands claim, but literally one of one. Slow indeed.

In addition to not being able to provide the entire back story at the point of purchase, it is nearly impossible to document the smiling faces of people who refuse to be photographed for cultural reasons that may be hard for the selfie-obsessed to comprehend. These and so many other contributing circumstances make it crucial for Duka to trust their retailers and feel comfortable that they are representing the brand respectfully and can speak to the process. This weekend’s pop up shop, therefore, is particularly special because Montauk’s own Martine and Juan were the first ever shop to carry Duka and are still their exclusive retailer on the East End. This is where Bruce Weber comes in. It turns out that Jules met Bruce in Montauk a few years ago when Duka was in its infant stage and all she had to show for it were an assortment of Kangas that had yet to be turned into anything. Bruce loved them and their origins and purchased a few then and there and eventually introduced them to Martine and Juan who also had the foresight to see their unique value and Duka’s retail potential. The rest, as they say, is history.

As much as I’ve tried to do it justice, Jules herself will be on hand to share Duka’s story with you at the beach house this Saturday (August 1st). Hopefully, you’ll shop, connect, wear the pieces with pride and let them serve as the conversation starters they ought to be. Whether that conversation is about cultural appropriation or the slow fashion movement, Kenya or Montauk, as long as it’s happening we’re moving in the right direction. Because the price and value of any item is more than what we pay for it we should all be questioning where the things we wear, use, ingest and apply come from, how they’re made and what the short and long term consequences are. Yet again, a Swahili proverb comes to mind (I’m just full of them these days): DUNIA SIO MASKANI: THE WORLD IS NOT JUST A PLACE TO HANGOUT.

SHOP FOR DUKA’S UNIQUE WARES VIA THEIR SITE NOW!

PS: Stay tuned for a soon to come limited edition hat collab between Duka and FairEnds. You heard (read) it here first!

BACK to LOW TIDE home
bruce weberdukafairendsFashionkenyamartine and juanStyleThreads
WE ARE