Don’t let their name fool you – Dirty Vegas was just the right trio to play a DJ set at the Montauk Beach House that summer. Their hit “Days Go By” attained global popularity back in 2001, and the boys continue to sonically terrorize the soundscape with their upcoming studio effort which they tell me about in the interview below. Could they be Dirty Montauk after this summer? Can I get slapped for a terrible joke? Either way, find out below:

How did you all initially meet? What made you gravitate towards each other to form the eclectic trio?

We all met on the UK club scene of the 90’s. We met each other as DJ’s, musicians, etc. which led us to making our own music in studios. Separately, we had all been releasing music and remixes for major and independent record labels in London like Parlophone, Sony, Bedrock, Strictly Rhythm and more. When we got into the studio for the first time in late 2000, there was a great energy from our years of playing in bands to becoming DJ’s on the club scene. 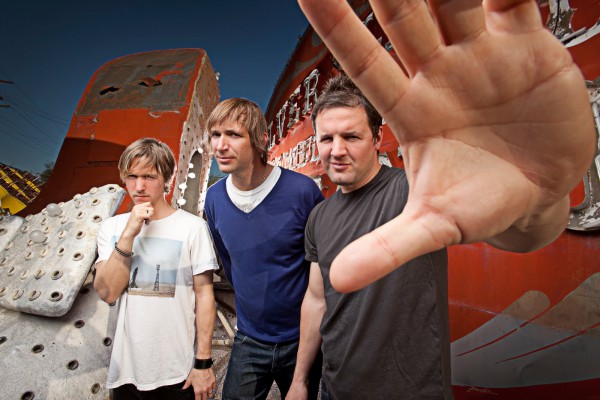 Also, what’s the story behind your name? Is it one of those what-happens-in-Vegas-stays-in-Vegas situations? A less-than-impressive hotel visit? Is there a cocktail named after you yet? Do tell!

We were originally called ‘Dirty Harry’ quite simply because of the two Harris surnames, but Time Warner told us we couldn’t use the name. With only 24 hours until our first vinyl pressing we went out clubbing in London and ended up in a Casino at 4am. We sat at the bar and saw a flickering neon ‘Vegas’ sign  and the band was born.

“Days Go By” was an international hit in 2003. How have you evolved since then and how is your creative process different today?

To this day, we still have the same work ethic when we’re writing. We have come from a traditional songwriting background, but have a huge love for electronic music, so we find new ways of fusing the two. Electronic music has never been more popular than now, so it’s very exciting times for new music and diversity from homegrown musicians releasing music.

I hear you have a new album coming out in the not-too-distant future. Can you tell us a little about it?

Yes we do, our 4th studio album called ‘Photograph’ will be released in September this year. We really feel the musicianship and the songs are some of the best we’ve ever done on this album. We’re very lucky and happy to be doing what we love for this long and that’s evident in the record.

Will their be a sonic sneak peek during your DJ set at the Montauk Beach House?!

Absolutely! When we played MBH last time it was a great ‘pool party’ atmosphere and part of our set will be some of the tracks from the new album along with some of the cool remixes we have done.

Besides your set, what sort of trouble are you hoping to get into while in Montauk? Any sightseeing/outdoor activities on the horizon?

Sunset at Navy Beach for sure, cycle rides out to Ditch Plains. Would love to also squeeze in a trip to a Vineyard.

How will you tailor your set for the Montauk crowd? What vibe do you want them to get jiggy with? I’m so sorry for saying “get jiggy!”

It’s a 4th July ‘Pool Party’ so it’s going to be a classic ‘get down’ party set. Montauk truly is one of our favorite places in the world so only a ‘Good Time’ will do!!

Do you have a beach look?! And if so, please describe it to me in three, monosyllabic adjectives. Multiple syllabic answers will not be accepted.

I think it’s really cool you always release vinyl. Why is it important to you and music in general to release music on vinyl?

Vinyl is where we come from, Paul still has a huge Vinyl collection and it’s great news to see that the UK has an official Vinyl album chart, for the first time since the 90’s. Let’s hope that happens in the USA.

What is the appropriate protocol the people of Montauk should follow to prepare for your set? Any surprises you can tell us about?

Get ready to let loose, dance like no one is looking and jump in the pool fully clothed or not 😉